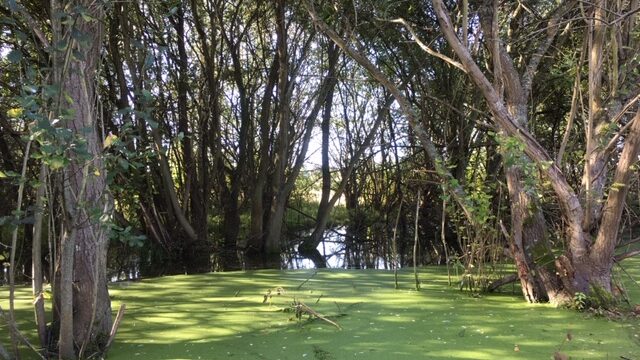 The FRA is in touch with two experts in habitat biodiversity who are both urging further study of the land at Fetcham Springs.

The fenland area of wet woodland on the northern edge of the site appears to be of particular interest.

Forensic ecologist Professor Patricia Wiltshire, who is based in Ashtead and also serves as an Independent Mole Valley Councillor, describes it as a ‘rare habitat’.

“This kind of habitat is of great importance in terms of biodiversity and there is none like it in this part of Surrey.  It is to be treasured and should be assessed in great detail,” she says.

Leatherhead-based botanist Pippa Hyde has compiled a provisional plant species list which can be viewed here.

She has walked around the site along the existing pathways,  and has so far identified 85 plant species.

She says: “The area is interesting for its mixture of habitats although I feel it needs much more investigation to discover its full potential. “

The land is owned by SES Water and the FRA understands from recent discussions with the company that it will be happy for other ecologists to survey the site.

Further contact with SES is expected in the New Year.  The Draft Local Plan published in the spring, provoked widespread alarm among residents by suggesting the Fetcham Springs land could be developed as playing pitches, with car parking and a clubhouse.

The FRA wants this ‘change of use’ to be taken out of the Draft Plan and the land to be preserved as natural green space.

The next draft of Mole Valley’s Local Plan is scheduled to be published next June or July.  This is according to the latest Future Mole Valley newsletter.

The document also confirms that the Council has adopted a changed approach to how sites for possible development are allocated, including in particular Green Belt sites such as Fetcham Springs.

The newsletter states: “Green Belt sites in particular are being assessed for exceptional circumstances on a site-by-site basis. This is to ensure that the importance of the Green Belt is better reflected in MVDC's considerations and is fully explained.”

The FRA, together with many residents, certainly believes that ‘exceptional circumstances’ exist at Fetcham Springs. It will be seeking to have the status of Fetcham Springs reinforced and enhanced as a valued Green Belt site to avoid it being left open to any form of development.